If there was one Main Character that got attention right out of the gate from the Legacy expansion it was Mystique. Her new level 3 ability got the creative juices flowing for many players. With an easier level up condition than some other characters it is much easier to go the route of Mystique than it is to try and struggle through Daredevil’s level up condition for instance. This included looking at Deadpool as an option to turn into with his alternate win condition.
I tried to think of the easiest way to develop a deck around that idea. Mystique into Deadpool for the alternate win if consistent, would be amazing. So while trying to figure out how to do this I came across another character that seemed to be quickly dismissed, Havok. Havok has a difficult ability to fire off needing 3 resources to blow up the field of ALL Supporting Characters not just your opponents (With the exception of cards names Havok or Cyclops) seems like not a lot of value however when Deadpool wants a cleared board it sparked an idea. How can I used Deadpool and Havok for the win? Below is the list I ended up with and I will discuss why I made the choices I did. 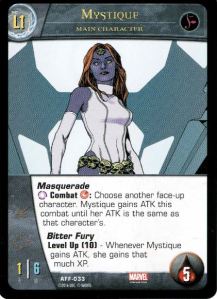 So after looking at the list I’m sure you were able to get the general idea. Use lots of plats to level Mystique as fast as possible. Then we also want 3 locations for Havok to use his ability to clear the field. The Xenomorphs are there to give us access to Spook. Spook lets us clear the Main Character as well so we can keep Deadpool ready so he can attack for the win. This deck obviously needs resources to run. 3 Laboratories and 2 Academies is a lot so Kane is there to help us get them. Cosmo Helps us around possible issues like Hex and Tough (Jessica Jones specifically). Starhawk lets you play cards off the top of the deck and ANY card you can pull off the top to get you closer to the next resource is gold.

Now what stops this? Mostly the amount of locations you need. This deck can win it’s not impossible the key is just getting to the locations so mulligans are important. Also as mentioned above, Jessica Jones with her ability to stop Mystique’s and Deadpool’s abilities can be problematic so Cosmo shutting her down can help with that as well as making sure she doesn’t just recover when Havok uses his ability.

What did you think of this deck list? Are you going to try it out and have some fun? Do you see ways to make it better that we missed? Let us know and enjoy!